The Revenge of Gaia (and the Origional Sin)

Posted on November 9, 2013 by gymnosperm

Our brains are layered in the same way sedimentary rocks are. In our lower brains lie the basic functions: breathe, eat and drink, thermoregulate, and reproduce. These are Archean functions we share with all living things. All beautiful, non-predictive analogies can be drawn too hard, but we suggest that the next layer might be Ediacaran functions in the mid brain: hard shell defense and fight or flight?

You can see where this is going, so we take a leap and call the upper brain a Pleistocene function whose properties are metaphor, art, and language.

There may be some rough correspondence to Sigmund Freud‘s conceptions of Id (let’s party), Ego (it’s all about me baby, I’m outta here), and Superego (what will the neighbors think?)

The human brain is way more complex than this, of course, with cross wiring between hemispheres and multiple redundancy everywhere. Yet the stratigraphic architecture sheds some light on original sin. We are constantly “conflicted” between the socially conscious communicating and cooperating forebrain and the lower layers whose impulses  would wreak havoc on these niceties.

There is an Indo-European pantheon of gods embedded in the language and culture of these yeomen whose pastoral, agricultural business model was so successful they spread from central Europe east to the Indus Valley and Iran and west to England and Scandinavia and south to Egypt and north Africa. 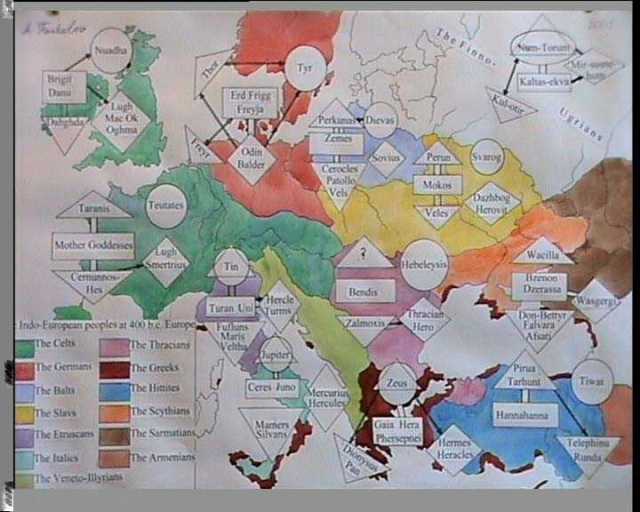 The downward pointing geometry represents deities of “earth powers “, which we suggest are metaphor for lower brain and connection to the natural world. Gaia is a Greek version not mentioned above.

Humans are creatures of metaphor and representation. We are creatures of language. We painted cave ceilings, we erected stone monuments, we dug underground cities and filled them with model soldiers.

We are partly of the sky (circles above) and partly of the earth. We feel the separation. This is our original sin, and this is why we live in fear, as our predecessors; of Gaia’s revenge.

1 Response to The Revenge of Gaia (and the Origional Sin)