A number of things we have noticed about red blotch did not really fit into the themes of prior posts but we feel bear mention.

The first, along the lines of Dr. Golino’s finding of a similar virus in a leaf from Sonoma County in 1940 is something we bumped into on the UC Master Gardener website.

“Roger’s Red” apparently is a prized “cultivar” for horticulturalists. Photo credit houzz.com. A google search will show that this vinifera/californica hybrid first found by Roger Raiche along Palmer Creek Road west of Healdsburg in 1983 has been propagated far and wide as an ornamental.

We sent an email suggesting this be tested for GRBaV to Master Gardeners and were assured the suggestion has been sent to Rhonda Smith.

The second is just an observation we make no attempt to interpret of unusual cane reddening and subsequent abnormal growth in a miniscule subset of symptomatic vines. We have not found it  in any asymptomatic vines, and it seems randomly distributed. 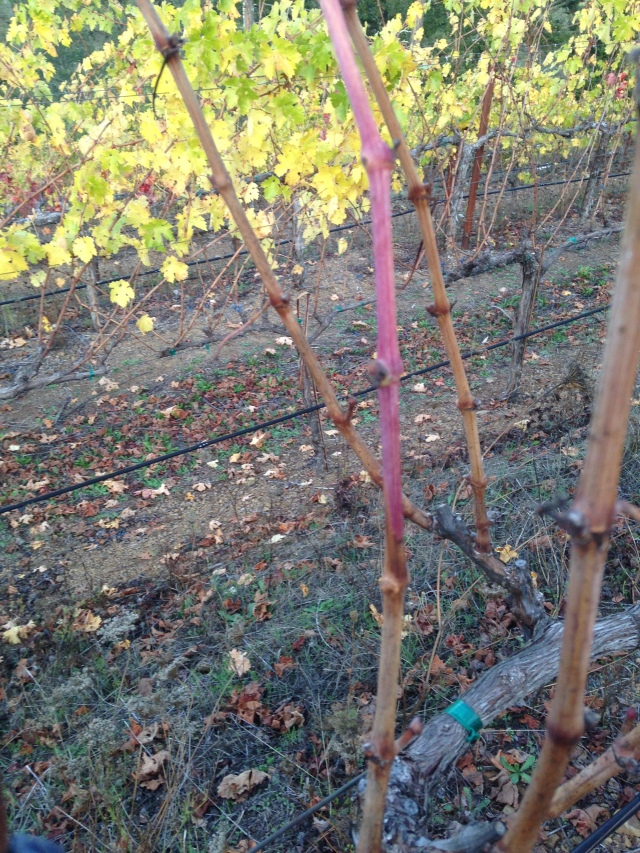 We first noticed it before overall leaf drop in some symptomatic vines vines that prematurely lost their basal leaves. Early basal leaf drop corresponds with the first year of symptom development to our eyes. In contrast, we find reduced abscission in fully developed gross symptomatic vines similar to that from girdling by breakage or the beetle.

This photo does not show it very well but in December we found unusual growth from these reddened canes. We could go around the vineyard to a half dozen places where red leaves were still hanging on and find growth like this from reddened canes.

The last is a quick comment on the red blotch state of affairs. Dr. Daane has been unable to get leaf hoppers to transmit blotch even at feeding levels barely sub lethal to the plants even though the virus can be assayed in their guts. The vector  remains at large. In Sonoma county researchers have had difficulty finding GRBaV negative control vines for comparison studies. Most assays performed so far have been to verify symptoms. The cost to systematically assay a vineyard remains staggering. We really have no idea the extent of this disease except as it is revealed through symptoms.