Nobody ever thinks about this, but when you drive your car down the street, when David Crosby drives his Tesla into a pedestrian, when solar cells wrought with energy from fossil fuels produce energy for the grid; twice as many molecules of di Hydrogen oxide (water) as Carbon dioxide result from the combustion that produced the energy.

Everyone says, ” So what, it’s just water”. True enough, we drink the stuff, or die, but nevertheless water is the kahuna of Greenhouse gasses on this planet, even by the befuddled standards of the evangelists who would relegate it to “feedback only” status. Carbon dioxide amounts to less than 10% of the greenhouse gasses.

Everyone is SO confused lately why surface thermometers in boxes at airports and cities have been reading so much hotter that the satellite observations of the lower atmosphere. 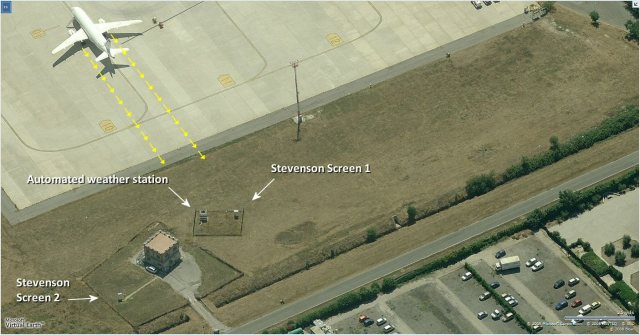 Really? Honestly, Carbon dioxide does contribute in some trivial way, but the airport/urban temperature record is so ridiculously biased by the LOCAL contributions of both gasses, it should be no marvel to even evangelists that the surface temperature reads hot.

Your basic 747 uses about a fifty gallon drum per minute during liftoff. Let’s just say 25 gallons of aviation kerosene greenhouse gasses plus direct enthalpy contributed to the immediate vicinity of the weather station PER PANE…