We have long been interested in Carbon isotope “excursions” and took a notion to integrate isotope ratios into a simple box model of the Carbon cycle with an eye to replicating these excursions. The initial result was surprising and it became apparent we will need to adjust our conception of the Carbon cycle to match measured values of atmospheric isotopic change before we venture into geological time. 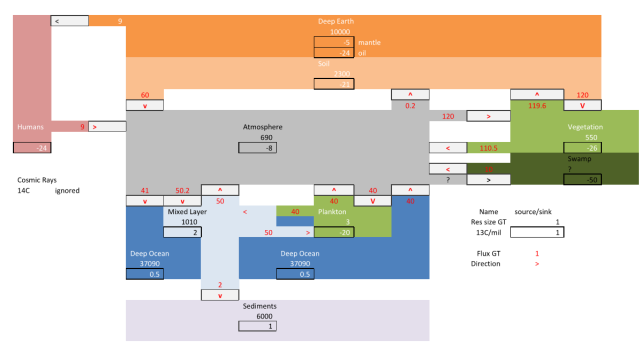 Each box has its name, the supposed reservoir size, and the observed 13C variance from the PDB standard. Fluxes are shown as appendages of the boxes with an indication of the direction and the supposed rate in Gt/year. The atmosphere is unique in that it communicates with all the other reservoirs. The input from the mantle to the atmosphere by way of volcanism is ignored as it currently seems very small.

We then set up calculations for the relationship of each reservoir with the atmosphere to derive the isotopic change in one year. The result was very surprising. It showed the atmosphere going -3.8 PDB, a very substantial excursion, in one year. We have measurements atmospheric 13C since 1978 and ice core data before that which generally agree that the atmosphere is actually moving more like -.02 per year, two orders of magnitude less.

The isotopes are telling us that our notion of the Carbon cycle is wrong.

We examine here the possibility that we are underestimating the ocean.

We confess to adding a box “Swamp” to the model to explicitly deal with biogenic methane which has been measured as low as -100 PDB. This stuff is glub glubbing up from wetlands and much is released from coal mining and oil production. The consensus might be that it amounts to little more than half a Gt/year, but with its staggering negative PDB values we feel it must be included when isotopes are integrated into the cycle.

We initially had it at 10 Gt and realizing that would be controversial reduced it to 2 Gt at a PDB value of -50. We feel this is defensible.

The bottom line it that after reducing Swamp and holding everything else the same it takes 262 Gt/yr input from the mixed layer to get the atmosphere to -.02/yr. The response is very sensitive. For example 265 Gt knocks the atmospheric response down to -.0005. The 262 Gt is about five times the reputed rate, but not an impossible number.

It should be mentioned that evaporation filters isotopes in the same direction as biological filtration. See:

The only way evaporative enrichment can occur is if light (-PDB) Carbon is exported to the atmosphere along with the vapor. This may be a force supporting the measured 7 uatm pressure disequilibrium in favor of the atmosphere over the ocean surface. According to Kevin Trenberth some 4000 Gt of water evaporates from the ocean surface each year. This evaporation factor works against our efforts to balance the isotope ratios, even as it supports the notion of a greater flux.

Realistically, our understanding of the Carbon cycle is very poor and all of the fluxes and reservoir sizes should have error bars the size if the values themselves. Integrating isotope ratios offers a new way to constrain the possibilities.

This entry was posted in Carbon Cycle, Carbon Dioxide Loves to Swim, Climate and tagged Integrating isotopes. Bookmark the permalink.

2 Responses to Cycling the Isotopes