This post reports on some progress on resolving our difficulty replicating MODTRAN Planck curves in a prior post. In a personal communication, Dr. David Archer kindly provided the spreadsheet used to produce the MODTRAN curves.

The problem we encountered was that in consistent units of radiance, we could not reproduce the MODTRAN graphic. We got the result below: Which differs significantly from this:

Our intention had been to increase the density of Planck curves for better resolution of the radiative temperatures in the CO2 deviation.

Remarkably, we discovered that when the factor of Pi is removed from Dr. Archer’s equation, it yields identical values to the standard Planck equation we have used.

What this must mean is that Dr. Archer’s factors of 10^8 in the dividend and 100 in the divisor are symmetrical. If so, why bother?

We discovered that the MODTRAN graphic can be acceptably reproduced in units of radiance on the same axis if the Total Radiance output is scaled by 10^4. That’s a lot of scaling. We have done our share of scaling to make things comparable, but always with far more modest scaling factors. At 10^4 you approach a realm where scaling matters for stuff like quantum effects.

We also discovered that an eerily visually similar result can be achieved on separate axes without scaling if another .2 increment (of 10^-5 W/m2) is added to the Total Radiance axis. This essentially stretches the axis, thereby compressing the CO2 deviation.

Wow. What does all this have to say about the reliability of temperatures implied by the relationship between the Planck curves and the CO2 deviation? Ultimately the scaling (or compressing) exercise is about getting the Total Radiance away from the deviation close to surface temperature. Nobody believes that over a wide area like the tropics, anything is radiating 10-15 degrees above surface temperature, as our first efforts implied.

Once you take the plunge of setting the top of the deviation reasonably below surface temperature, things appear to fall into place nicely. The shape of the P and R rotations on either side of the fundamental bend, and the top corners of the deviation match the Planck curves too well to deny a relationship.

The graphic below appears on the University of Chicago MODTRAN website. 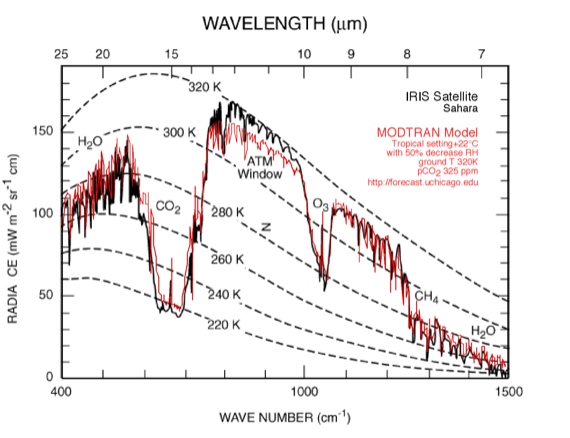 It is a validation of the program against measurements over the Sahara by the IRIS satellite. It is in units of radiance. (Having the N from radiance decide it needed to appear in the middle of the graphic is something that would happen to me!)

Most of the old satellite radiances are plotted against Planck curves. It is dissapointing that no mention is ever made that  the measured radiances are grossly scaled or massaged to fall in line.

This entry was posted in MODTRAN, Radiance. Bookmark the permalink.