The Temperature and Altitude of Radiation to Space III Above the asymmetry of brightness temperature to tropical 70 km radiance. Nothing about this effort has been easy, and the only check we can use on the accuracy of the Planck curves for determining the radiative temperatures of individual lines is to use the temperature of the MODTRAN tropical lapse rate. We report here the results of stepping up in altitude and comparing the strong lines as determined by eyechrometer against our densified Planck curves, with the lapse temperatures of the chosen altitudes.

Above we see the eyechrometer results from our 5 degree densified Planck curves. The two fairly flat lines at the top are the top corners of the CO2 deviation, 544 and 792. It can be easily seen from the second graphic below that these change little with altitude. They bound the CO2 deviation, are among the weaker strong lines, and abut “windows” on either side that radiate to space at surface temperature. The next two lines are 598 and 742. They both drop off rapidly with opposite curves through the troposphere, and flatline through the rest of the section. The next two are the stronger lines 618 and 720. They behave more like the by far strongest line (magenta 668). The last two are 648 and 688. They are the boundaries of the rotational bands that follow the fundamental bend at 668. They define the zone of zero transmission to the tropopause, and follow 668 (and the lapse) through the troposphere. At 20 km, where the prominent “spike” at 668 begins, they diverge. 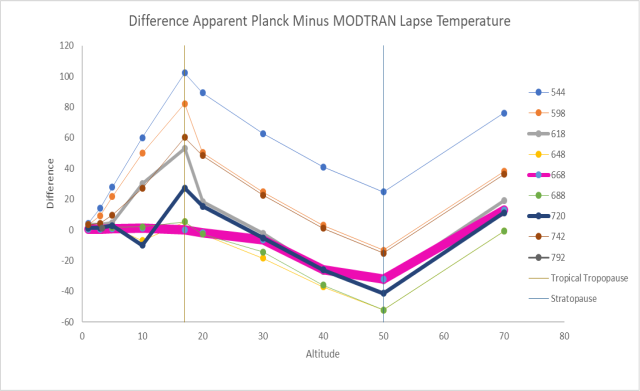 Above the CO2 deviations are compared at 1 kilometer, 5 Kilometers, 10 kilometers, and 70 kilometers. The strong absorption lines are easily traced up in altitude. As we progress upward in altitude, the apparent Planck temperature becomes increasingly different from the lapse temperature for most lines up to the tropopause. From the tropopause to the stratopause the differences all lines decrease and reverse sign. The sign of difference reverses again from the stratopause to maximum MODTRAN elevation at 70 km.

The radiances and lapse temperatures are both averaged over the tropics, so the systematic discrepancies should mean something. The striking feature is that the sign of the discrepancies follows the lapse rate.

TOT_TRANS:
Slit function direct transmittance for the line-of-sight (LOS) path including all sources of molecular and particulate extinction.

This sounds a lot like total transmission, but it seems unclear whether the surface in direct line of sight must always be the ground, or whether a different altitude and temperature can be specified.

We tried the “Ground Temperature Offset” feature to set one kilometer of lapse as the “surface” TPTEMP, but this merely moved identical radiance 6 degrees (the lapse) down the apparent Planck curves.

Above we find that Surface Emission and Transmission are very similar except in the lower wave numbers of the CO2 deviation, with emission being somewhat stronger than transmission where they diverge. We have no explanation and find neither useful in determining the radiance from below that seems to drive the difference between apparent Planck and lapse temperatures. In the zero transmission and emission zones, which are the same, there is still radiance from below. This radiance must come from surfaces above the ground.

In the next post we will take a stab at gauging above ground radiance (and possibly emissivity) using downward radiance.

This entry was posted in MODTRAN. Bookmark the permalink.