Geologists have great fun with puns on the term “schist”. Technically, it refers to metamorphic rock; rock that has been altered by high temperature and pressure. There are several grades of schist, our former favorite was “blue schist” as a double pun. You can imagine our surprise to find a camp in the Grand Canyon called “Bull Schist”, dispensing with subtlety. 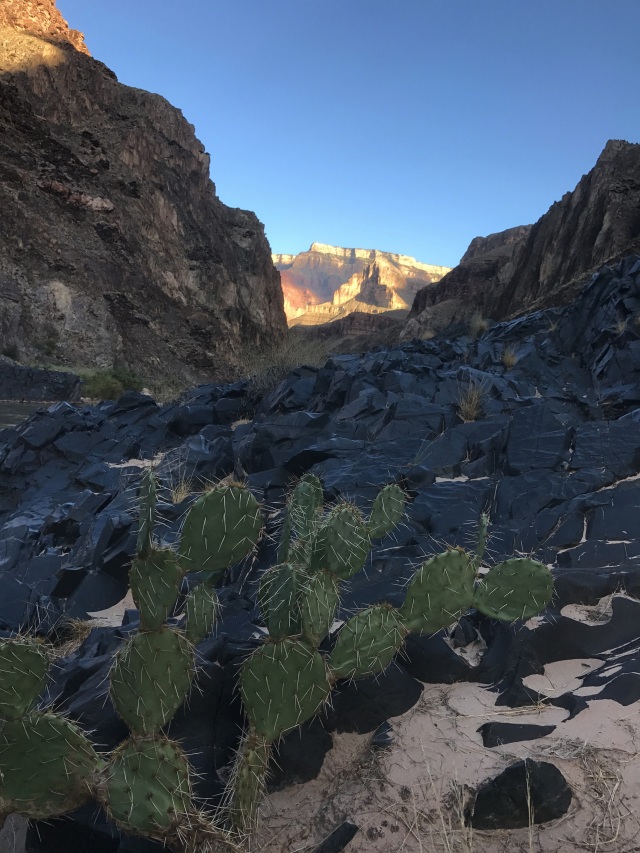 The first schist encountered by river runners is the Vishnu schist about mile 78. This is also the first Paleoproterozoic rock encountered. The overlying Bass formation, the lowest of the Mesoproterozoic and Neoproterozoic Supergroup, is about 1.25 billion years old. The Vishnu schist shows multiple episodes of folding and metamorphism, but it is shot through and through with granite that has been dated about 1.68 billion years old, so there is a very significant unconformity here, a time lapse of some 430 million years.

We originally intended to ignore the granites and focus on the schists, but it is telling that the three gorges in the Grand Canyon that expose Paleoproterozoic rocks are called the upper, middle, and lower granite gorges.

Above the top of the Vishnu is shown as a green line in the first river encounter, just below Hance Rapid. Granite intrusions are shown in pink. The Bass Formation extends to the top of the red cliff face above the Vishnu/granite.

Current thinking is that the Paleoproterozoic Grand Canyon area was something like  current Indonesia, shown below; a complex subduction trench, island arc, back arc basin arrangement.

Granite forms deep in the wet conditions beneath subduction related volcanic mountain ranges and island arcs. It cools slowly, and varies considerably in composition and crystalline structure depending on the exact conditions of temperature and pressure. Many different plutons (blobs) of granite can be identified, notably the Elves Chasm pluton of (maroon) granodiorite above. It is the oldest rock exposed in Western United States.

We intend a separate post on these plutons, but above we have simplified.

The (pink) 1.685 to 1.68 Ga granite is what we found  intruding the Vishnu at the first river encounter above. This stuff intrudes just about everything down the granite gorges with veins too small to draw. It seems to increase in tendency to form larger intrusions as we proceed downriver. Some folks consider this time period to be the peak of metamorphism.

The (maroon) granodiorite spans a lot of time from the Elves Chasm 1.84 to 1.71 Ga. It is far more foliated (showing layers), and expresses as plutons more than micro intrusions. It probably represents a series of main island arc mountain ranges.

Farthest downriver we have the (salmon) 1.375 Ga granite. This is granular (not foliated) and is actually of Mesoproterozoic age, but it is over 100 million years older than the Mesoproterozoic Supergroup members upstream. This is the Quartermaster pluton and it tends to look more like Sierra Nevada granite.

The reality is the granites and schists of the Grand Canyon Paleoproterozoic gorges represent an inseparable dance of island arcs and back arc basins pressed against the North American Continent.

We have done enough hard work to earn a flight of fancy.

Well, there you have it. A fanciful attempt to reconstruct geography 200 million years before eukaryotic (with a nucleus) cells evolved. Our most serious suggestion is that the distribution of Vishnu suggests two uplifts that dictate the “W” of the Grand Canyon may be ancient basins.