We believe that granite is formed when thoroughly hydrated ocean floor sinks at a subduction zone or trench, often at the edge of a continent. When it sinks deep enough it gets cooked at very high temperature and pressure, and the more volatile components rise and intrude into the rock above, forming volcanic mountain ranges or island arcs. Within these volcanic mountain ranges granite forms, to be exposed only after the overlying more volatile volcanics are eventually washed away.

There were bits and pieces of continents earlier, notably the nascent continents of Australia and Africa, but there really wasn’t much granite around before about 2.7 billion years ago, possibly because there wasn’t enough water to make much of it.

So essentially once the ocean basins filled enough to hydrate granite formation the continents have steadily grown by accretion of granite to their present size and the process continues today. 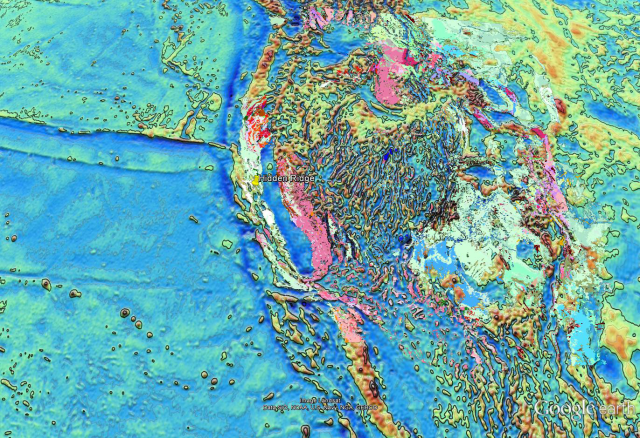 Here is the surface distribution of granite in the Western United States shown on a gravity map. The gravity represents the total mass between the measuring satellite and the center of the earth. In the dark blue areas of low gravity there is either more water and less rock, for instance along the prominent Mendocino Fracture Zone in the Pacific Ocean, or less dense or thinner continental rock sections, such as the California Great Central Valley and many smaller interior basins.

It is notable that the Sierra Nevada granite batholith and the trench that created it (the Central Valley) are bounded by the Mendocino and Murray fracture zones in the Pacific. It is as if the section of ocean ridge or spreading center (since overridden) between these fracture zones was entirely responsible.

Fracture zones often offset segments of ocean spreading ridges like this picture of the Atlantic Ridge. The offsets accommodate different spreading rates between segments and the curvature of the planet.

The concept of individual spreading segments matching individual granite batholiths may help us understand the sprinkling of small batholiths throughout the Western U.S.

This entry was posted in Geography, Geology, Gravity Anomalies. Bookmark the permalink.