Been puzzling lately over this graphic from the university of Colorado. 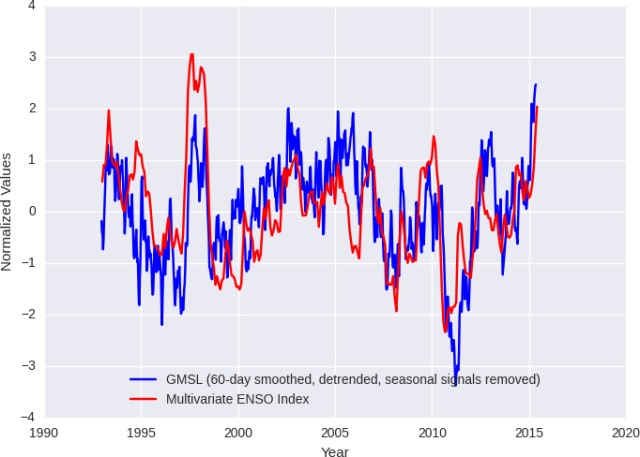 It shows a very significant relationship between El Nino and global mean sea level. The notes on their website, http://sealevel.colorado.edu/, state that “often” the ENSO index leads sea level and observe that the NINA of 2011 apparently caused global sea level to drop.

The simplistic reasoning usually applied to this goes something like, “Oh yeah, Ninos are hot and Ninas are cold, it’s thermal expansion and contraction.” Well, ENSO indices are measurements of ocean surface temperatures. They do not create energy. The Nino condition allows a lot of warm water that the trade winds have piled up against Indonesia to relax back across the Pacific and replace normally much colder upwelled water off Peru.

Nothing in this process should change the overall temperature or altitude of the global oceans.

So what is going on? To my eye, GMSL leads ENSO about as “often” in their graphic  as the reverse they cite . We don’t know what’s going on and we really need to know if we ever want to understand ENSO.

Since the relationship is clear sea level must now be considered an “index” of ENSO. Accordingly it is included in the graphic below used in the previous post.

The graphic says “monthly” but the data were since averaged into yearly and the same was done with the GMSL data. One purpose is to see if the sea level matched any particular ENSO index better than the rest. Nope.

If you look at the Colorado graphic carefully you can see that GMSL dropped sharply during the 1998 Nino, and then rebounded. When this is averaged on a yearly basis it makes for a far less than impressive sea level rise in the “super” Nino that year. It is also interesting that the 2011 sea level drop dramatically overshot the other indices.

All we can really say is that we are looking for an ENSO driver that:

Wow, nothing really comes to mind…

This entry was posted in Climate, ENSO, Global Mean Sea Level and tagged GMSL and ENSO. Bookmark the permalink.

1 Response to Sea Level and ENSO