The tile of this series promises a comparison of CERES and MODTRAN. The groundwork of exploring the CERES data in the first three posts is done. At the conclusion of the first post, we concluded that CERES and MODTRAN could not both be right.

MODTRAN has no time dimension. It differs only on the basis of gas concentrations in the atmosphere, and it deals only with infrared (IR) light, the spectrum the earth radiates based on its temperature. MODTRAN can be related to CERES in time by adjusting atmospheric CO2 concentration to match the yearly values. We used the data from Mauna Loa in Hawaii. The comparison is further complicated because polar orbiting CERES data covers the entire planet, and MODTRAN data is broken down into tropics, mid latitude summer, mid latitude winter, subarctic summer, and subarctic winter.

CERES data defines the top of the atmosphere as 20km. This is easy to match in MODTRAN by setting the altitude. CERES TOA data is limited to clear sky and all sky. All sky, which is whatever the satellite saw, is what we would like, but MODTRAN has a smorgasbord of cloud options that would be difficult to relate. 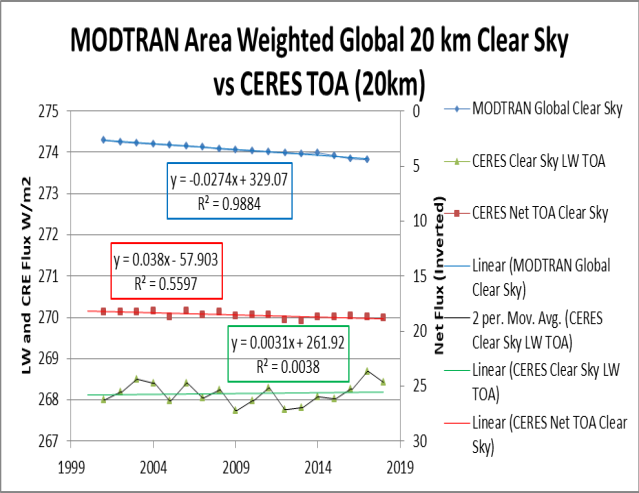 The result, at the top of the graphic above, predicts a modest but steady linear decline in IR radiation to space as CO2 concentration increases.

The CERES measured LW data at the bottom of the graphic is more jumpy, but definitely does not show a steady decline as MODTRAN predicts.

In the middle of the graphic, plotted on a second axis, CERES net clear sky data, which includes shortwave reflection, is inverted to show that increases in value result in net energy gain.

It is worth bearing in mind that the CERES time series basically corresponds with the “pause”, the lack of statistically significant warming in satellite lower troposphere datasets between the millennium and the 2016 el Niño. The lack of any reduction in CERES  clear sky radiation to space, as MODTRAN predicts, suggests that CO2 is not driving warming.

The CERES all sky data is what shows the reduction in TOA radiation to space. The difference between clear sky and all sky is clouds. It appears that clouds are warming the planet.

To continue this comparison of CERES and MODTRAN, we will need to figure out how to equilibrate the smorgasbord of cloud options in MODTRAN with “all sky” in CERES.