We offer here a new gauge for sensitivity based on the following analysis: 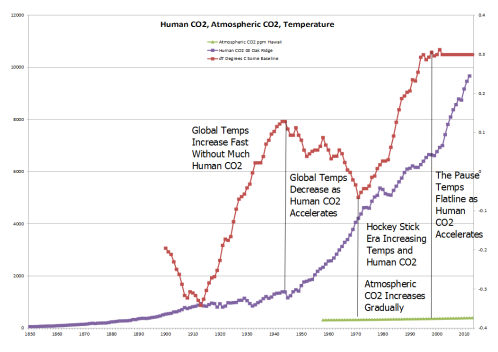 It is recognized that a certain oscillation first noticed in fishery production called the PDO for Pacific Decadal Oscillation exerts an influence on global temperature. This is really a terrible name because the period of the cycle is something like 60 years. We really have no idea what is causing this and sophisticated statistical analysis cannot pin it down, but if you look at the graphic above you can see that from part of a cycle from 1900 to 1913 and from a full cycle from 1945 to 1976 the red line of global temperature anomaly declined sharply.

The next shift was not due until about 2006, but we had an exceptionally strong El Nino in 1997 that either burned off the remaining warming prematurely or tipped the scale early, or both. Instead of rising or falling global temperature anomaly has been flat for 17 years.

We propose that the difference between the temperature drop in the 17 year period between 1945 and 1962 of .07 degrees C and the lack of any drop in the last 17 years (zero), divided by the increase in atmospheric CO2 from the bottom of the last cycle (1976) to the present of 66 ppm CO2 yields a crude index of climate sensitivity.

If we thought this was a really great index we would have found a more auspicious name, but when the current range of estimates is from negative to Armageddon, we feel that any flake of a toehold is helpful.

The sensitivity given by this index is .001 degrees C/ppm CO2. This is in the lower part of the range and would require an increase of 1000 ppm to get a degree of human temperature change.

1 Response to The Dud PDO Index of Climate Sensitivity