What Climate Sensitivity Should We Expect?

The great failing of climate science has been the inability to constrain the range of climate sensitivity to human CO2. The possible range remains from slightly negative to +5 degrees for a “doubling”. The concept emerged when the atmosphere was 350 ppm and doubling would be 700 ppm.

We are 50 ppm into the program with little warming to show for it. It is time to look for new approaches. We suggest taking a step back and evaluating what we do know and how that might help us constrain sensitivity.

Half tongue in cheek we have offered a “Dud PDO” index of sensitivity. This is not a great index because we know little about the PDO except that the most recent warming phase was a decade too short for the pattern and it hasn’t warmed since. Maybe the 1997 Niño  shot the wad for the cycle and temperatures have been languishing before a coming fall?During the last cool phase temperatures did fall fitfully for three decades.

We know that human Carbon is only about 5% of the annual Carbon cycle on earth. Elemental Carbon is not a big warming factor, but when you look at the Carbon cycle, Carbon moves through almost entirely as CO2, the accused. One can reasonably argue that our portion of the annual cycle is the outside limit of sensitivity. About half of our emissions appear to be absorbed currently (the red numbers) reducing sensitivity further to around 2.5 %. 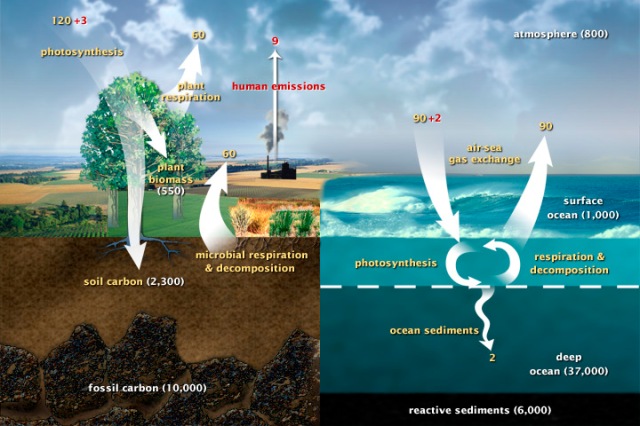 All of the Carbon dioxide currently in the atmosphere represents only about 2% of the “greenhouse gasses” by weight. Humans stand accused of a bit more than 1/4 of the accumulation. However, the gasses do not resonate by weight, they do it by molecule and CO2 is twice as heavy as water, the primary greenhouse agent. For any given weight there will be twice as many resonating molecules of water as CO2. This line of reasoning sets human culpability at about .25% of the greenhouse effect.

Would that it were that simple. A significant part of the greenhouse effect is from the “top down” from incoming solar radiation and CO2 is a marginal player in these spectra. 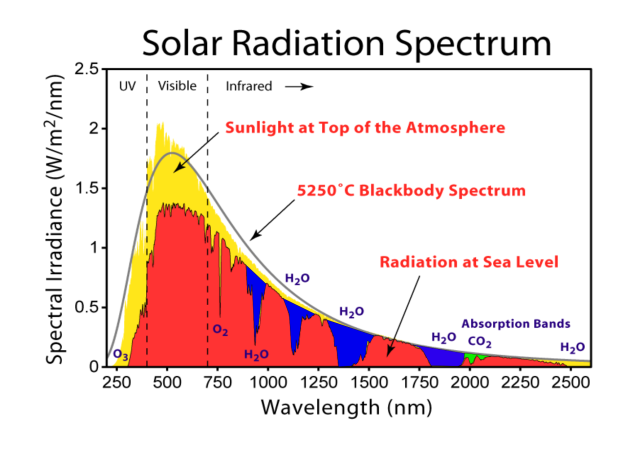 This effect potentially divides the .25% in half again.

In the outgoing spectra CO2 occupies a prominent position.

But the bands in the middle of the four vertical lines are saturated by Beer’s law. The narrow columns on either side remain and may be amplified by “pressure broadening“. Pending Robert Brown’ s conclusions on the quantum quantities of the broadening effect, we offer an “energy of the photons” gauge for the importance of saturation. This energy is given by the speed of light divided by the wavelength times Planck’s constant. By tabulating the energies for each wavelength in the CO2 absorption spectrum and subtracting the portion that is saturated, we derive a 63% reduction in energy as a result of saturation.

If we keep dividing our culpability in half like this there won’t be much sensitivity left.

So how much climate sensitivity should we expect? What does it mean that we contribute 5% to a global annual cycle that has resulted in the accumulation of 120 additional ppm of a gas that in aggregate represents 1% of the resonating molecules in the atmosphere? What does it imply that whatever effect our contribution has made is heavily weighted to the outgoing spectrum which is maybe half of the greenhouse effect and perhaps half of that spectrum is saturated?

It means that unless there are feedback or emergent effects that have been conspicuously absent for the last 17 years, we have little reason to expect high climate sensitivity to a “doubling” of CO2. If we are responsible for .0625% of the current greenhouse effect and the greenhouse effect explains all of the warming since 1850 (.8 degrees), we are responsible for .05 degrees so far. Five hundredths of a degree divided by 120 ppm yields a human climate sensitivity of .0004 degrees/ppm.