A Chronology of Red Blotch

Posted on November 8, 2015 by gymnosperm

The single strand DNA virus shown to be the causative agent in Red Blotch disease of grapevines will almost certainly become a new genus in the family Geminiviridae. Phylogenetic evidence suggests that GRBaV diverged about 250 million years ago before the breakup of the supercontinent Pangaea.

Lets just say it’s been around a long time.

Dr. Golino has assayed the virus from a leaves collected in 1940 near Geyserville.

The grape was “Burgandy”. A close examination shows some similarities and also some differences from what we are seeing, as expected with at least two generations of rootstocks and clones intervening.

1. The virus was widespread in grapevines 1940.

2. This was an unusual occurrence in grapevines.

Vineyards were not widespread in 1940, complicating the issue, but this was the only sample that tested positive. Dr. Olmo obviously found it unusual and interesting enough to warrant saving the leaves. One presumes that an ancient virus, if it did not commonly infect grapevines in 1940, must have been present in the surrounding vegetation and spread to the sample.

Brian Bahder found GRBaV in both wild grapes and blackberries in 2014, although the blackberries tested negative in the winter dormant period.

According to Dr. Jean-Sebastien Reynard, two accessions, Zinfandel A2V13 and Emperor A2V18 imported from UC Davis in 1985 to Switzerland, were found to be infected with GRBaV.

She uses the latest acronym GRBV in the first column for blotch because Koch’s postulates have been fulfilled and the disease is no longer merely “associated” with the virus. There is no way to know if these infections were latent in the planted stock or subsequently spread to them, but it is interesting that oldest period that spans one hundred years has a lower current incidence than the two fifteen year planting booms that followed. You would expect much higher incidence in the oldest period from accumulated transmission if transmission were efficient.

What appears to be transmission has been measured by qPCR at the UC Davis Oakville Station. Vines that previously tested negative tested positive at a rate of about 4% per year. 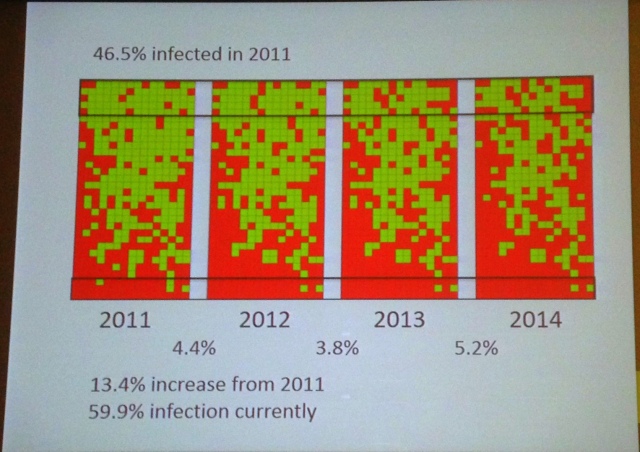 We can roughly analyze Kari Arnold’s boom periods on the basis of a 4% transmission rate as follows:

It is quite evident that a 4% transmission rate cannot have taken place even back to 1981 without all of the vines being infected by now.

We are dealing with an ancient virus that is first documented in a grapevine in California      in 1940.

Infected stock was shipped from UC Davis from at least 1985 until 2011.

Assuming a 4% annual transmission, all of existing vines planted before 1981 have been exposed to the virus and most of the observed infection since 1996 would be from transmission.

Assuming zero transmission, about half of the vines planted before 2011 were planted infected.

Symptoms were first noticed by growers in Napa in 2008, prompting the “discovery” of the virus in 2012.

What to make of all this?

It does not seem tenable that a virus that has been in grapevines since 1940 and shipped regularly from Davis since at least the mid 1980’s should suddenly show up in 2008 and since become symptomatic and problematic in every vineyard in California without something fundamental having changed.

Steve Thomas of the Kunde Vineyards reports about a 10% GRBV infection rate in certified nursery stock in plantings since 2005. This agrees well enough with Kari Arnold’s 13% current infection in 2011 to 2014 plantings (with a bit of transmission) that 10% seems a reasonable baseline to suppose for historic infected planting.

Using this as a baseline and Kari’s current infection of boom periods we can roughly regress transmission.

It can be seen that either the rate of infected planting or the rate of transmission, or both, was substantially higher in the 1996 to 2010 boom. Something fundamental happened then, but something else fundamental must have happened in about 2008 to bring about the recent explosion of symptoms.